Russian electrical heating equipment market has been rapidly developing since 1998 – a year of economic crisis. This market capacity has practically 5 times grown for the last three seasons. According to the results totaled in winter 2001-2002 Russia accounted for 25-30% of Screen & Hot Air Gun Heating Systems market of Europe. Russia’s share on this market may double in the near future primarily due to its cold climate (see Figure 1).

As can be seen from the map the European climate is softer than that one of Russia thanks to Gulf Stream. The climate becomes colder from the west to the east. So average daily January temperatures of Great Britain, France, Spain, Portugal, Italy, Greece, Denmark, Western Germany and Benelux countries never fall below 0°С. At the same time they are between 0 and –4°С in Eastern Germany, Austria, Switzerland, Southern Sweden and former socialistic countries and between –4°С and –8°С in CIS countries and the most part of Scandinavia.

The map also clearly shows that January isotherm –8°С practically coincides with the western boundary of Russia and the whole Siberia lies to the north of –16°С. 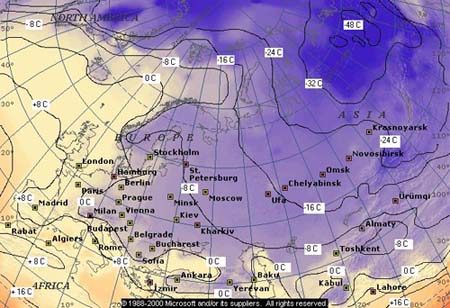 This means that Russia’s climate is much colder than that one of the more populated areas of Scandinavia. It is also worth noting that Russia’s population is 6 times as many as that one of Norway, Sweden, Finland, Denmark and Iceland in total. Thus, Russia is the largest potential market for electrical heating equipment in the world. The low prices to the European measures for electric power also favor its rapid sales growth. Now individuals and businesses pay 56 kopecks (0,019$) and 80 kopecks (0,025$) respectively for 1 kw-hr. It is worth noting that gas and liquid fuel prices are gradually approaching to the European ones.

Within the next few years Russia is expected to be of the same importance on Screen & Hot Air Gun Heating Systems market as China – on ACU market. The domestic markets of both these countries are rapidly growing into the largest ones in the world. Both Russia and China experience an appearance of a great number of domestic producers who are gradually forcing out foreign products. At last, both Chinese ACU manufacturers and Russian producers of Screen & Hot Air Gun Heating Systems have every intention to export their products. There is direct evidence of their success in this direction.

A most possible scenario of Russia’s electrical heating equipment market development is as follows. Domestic producers would take at least 90% share and oust the heating systems imported from Byelorussia, Ukraine, Kazakhstan, Baltic countries, as well as start penetrating into the markets of Germany, Scandinavia and Eastern Europe. By the way, Germany has already witnessed the first sales of "Tropic" equipment.

WHAT IS AT THE BOTTOM OF SUCCES?

Nowadays, having lower prices the best Russian heating systems are highly competitive with import equipment performance characteristics. There are several reasons why domestic manufacturers take such a big share on the Russian electrical heating equipment market and have a confidence of success in their exporting plans. First of all, unlike ACU producers, who make components for their products by themselves, most manufacturers of Screen & Hot Air Gun Heating Systems buy engines completed with heater fan impellers, tubular electric heating elements and automatic equipment from the same companies. Therefore any kind of equipment can be easily duplicated at the level of component parts and it is practically impossible to do anything with that. It is worth noting that the leading Russian producers are highly competitive with the world leaders by state-of-the-art equipment and have been certificated with ISO 9001 standard for a long time already.

That is why those companies who can offer more competitive prices would defy the competition. One should also take into account the fact that in spite of the use of foreign components it is much more profitable to make equipment in Russia.

A Moscow worker’s monthly wage is about $300-400. The cost of labor force in S-Petersburg and Moscow region is one and a half less than in Moscow. And it is about $200 in Central Russia, Volga region and Ural. So, manufacturers have a possibility to employ the most experienced workers at low pay. At the same time Sweden, Norwegian and German workers earn about $1,200-2,000 per a month.

One should also take into account the fact that in case one supplies component parts only the volume of goods is about three times smaller as compared to ready-made Screen & Hot Air Gun Heating Systems. At the same time Russian producers have mastered in Russia manufacture and painting of lightweight bodies of Screen & Hot Air Gun Heating Systems. These factors not only reduce costs of equipment transportation but also cheapen its production.